In addition to marketing/communication and Spanish speaking, I also am taking business Spanish, EU politics, and Spanish/Latin American film.

After class some days (before dinner) I go to the semi-sketch gym, get tea with friends, take naps, write, play indoor soccer with my host brother, and so on.

I’m still trying to volunteer at a hospital or the Red Cross or something similar but the program directors still haven’t gotten back to me.

Some random things that have happened this week: For one, I discovered the wonder of hot milk with cereal (I know what you’re thinking– I was thinking it too). My host mom warmed milk for a minute before putting my GF cornflakes in and wow, I will never go back to cold milk. It soaks in better and enhances the flavor. So good. Try it.

Turns out that falling last weekend (off the ramp in the synagogue) not only hurt my pride but sprained my ankle. Its basically better now, but an embarrassing way to get injured.

Finally, my host brother is super dramatic and has figured out (he thinks his mom doesn’t know but she does) that in order to get to sleep in her bed while the dad is gone he fakes a tummy ache (which mysteriously disappears when she agrees to let him sleep with her). It’s a good thing he’s cute because I think it makes up for his inability to lie (also not a bad quality).

Friday, February 8th I didn’t have class so I went to the gym in the morning before a mandatory program class on diversity and race in Spain. (Basically, especially because of the Franco dictatorship, there isn’t as much diversity in Spain as in the US, and either way it isn’t talked about as much here). I think it was an important topic to discuss but unfortunately wasn’t as deep (or applicable) as I wished it had been. I also went on a preliminary trip to the Albaicin with a friend of mine from the program, where we passed a few churches (including the one my host parents got married in, so cute) and the medieval torture museum? (We didn’t go in. I didn’t realize this was a thing).

February 9th we went to the Alhambra, the most visited site in Spain. Technically it’s a city with a wall, although it also refers to the main “castle”. Afterwards, we walked to the Generalife, the summer home of the Alhambra.

February 10th we walked through the Albaicin, the old city. There are banuelos (bath houses), teterias (tea shops)– one of which we went to for tea and pastries (including gf chocolate cake), Arabic crafts, etc. We saw the Alhambra this time from outside, old houses from the inside, the banuelo, the tea shop, and more. 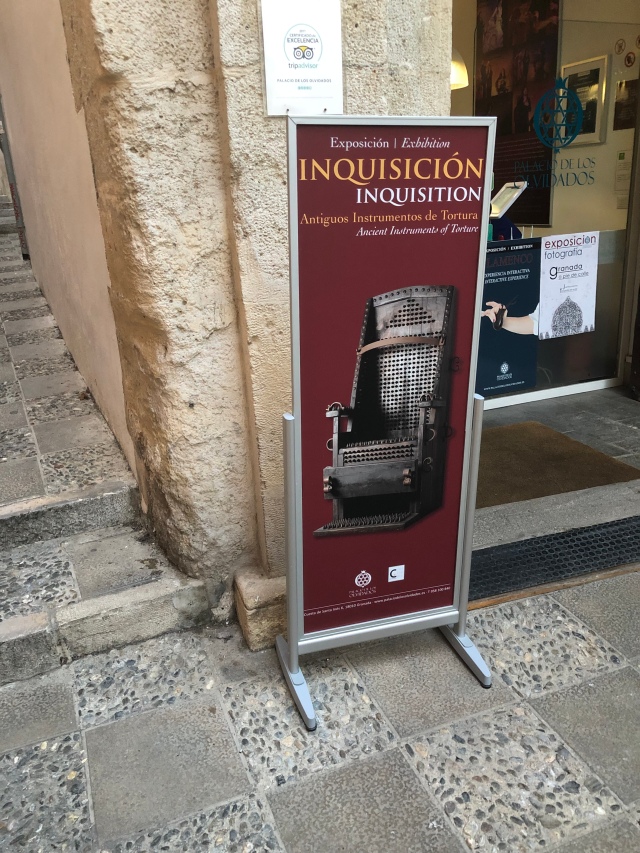 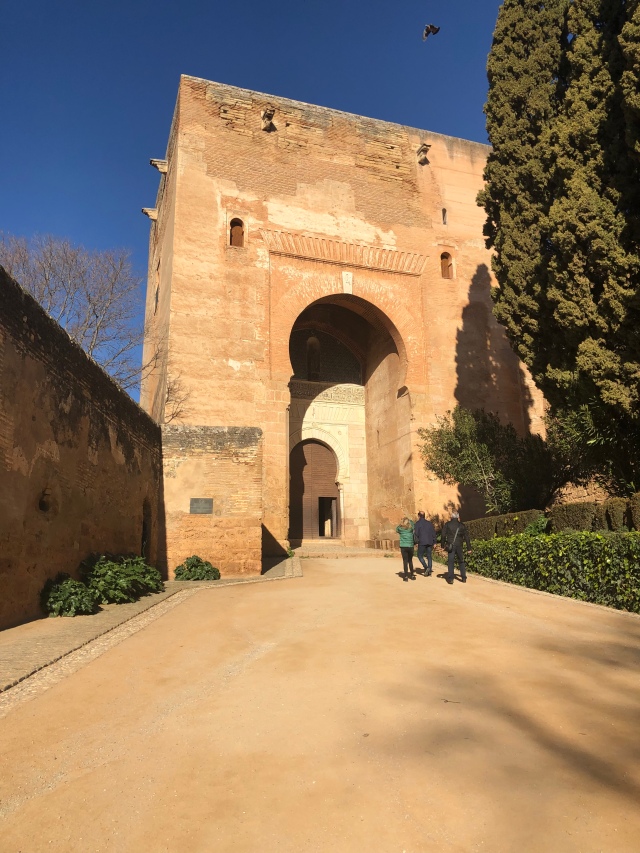 The entrance to the Alhambra!

View from one of the Alhambra towers. 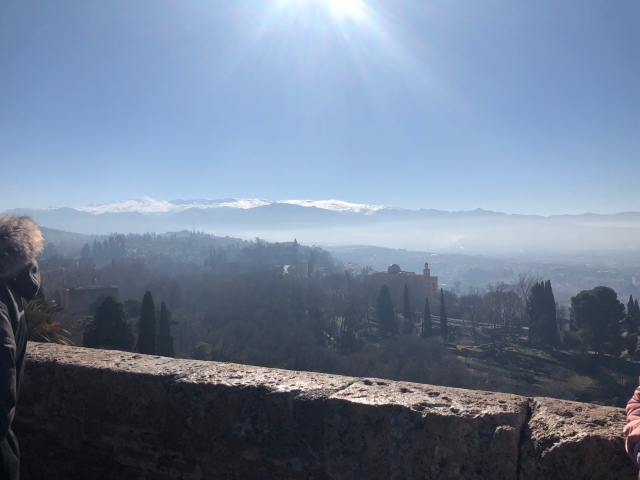 Another view — of the Sierra Nevada. 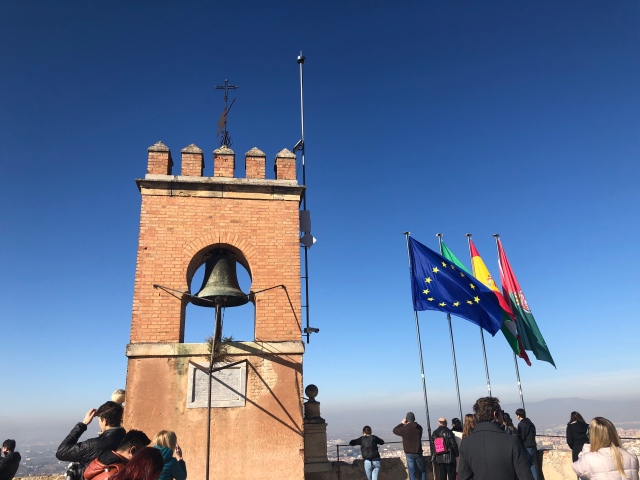 The Alhambra warning bell– for intruders or attack– alongside the flags of Granada, Andalucia, Spain, and the EU. 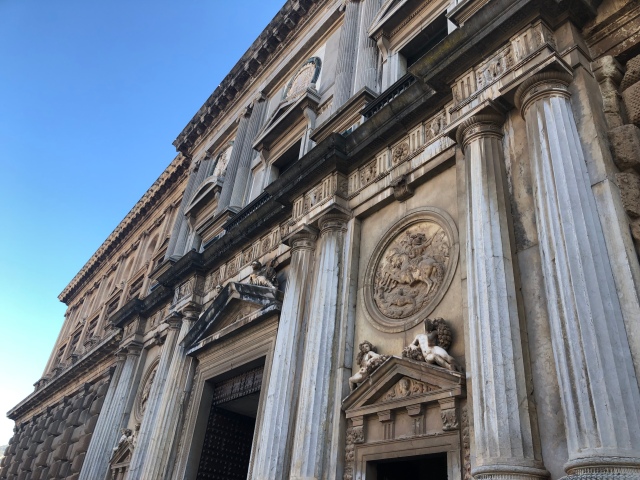 Intricate, post-renaissance carving on the outside of one of the buildings in the Alhambra city.

Looking pool and hedges in a courtyard.

The pool and hedges from another angle.

Arabic carvings in the doorway and wall.

Ceramic tiling and plaster carvings in the palace, an alcove in the Sultan’s room.

Another part of the Sultan’s room. 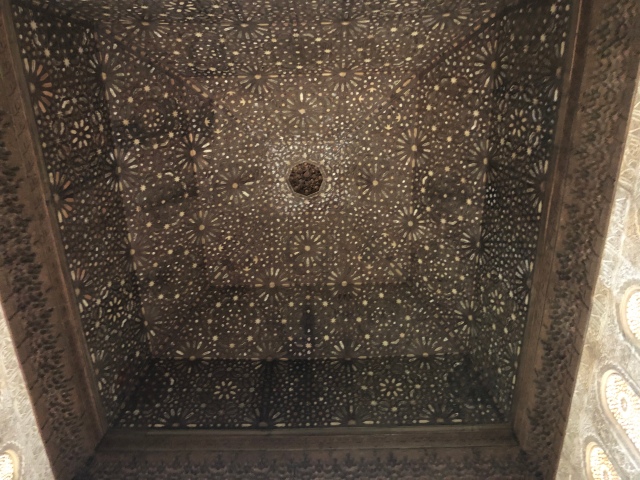 Ceiling of the Sultan’s room.

The famous courtyard with the fountain of the lions.

Two other views of the courtyard and carved arches around it.

Two ceilings, all carved out by hand. 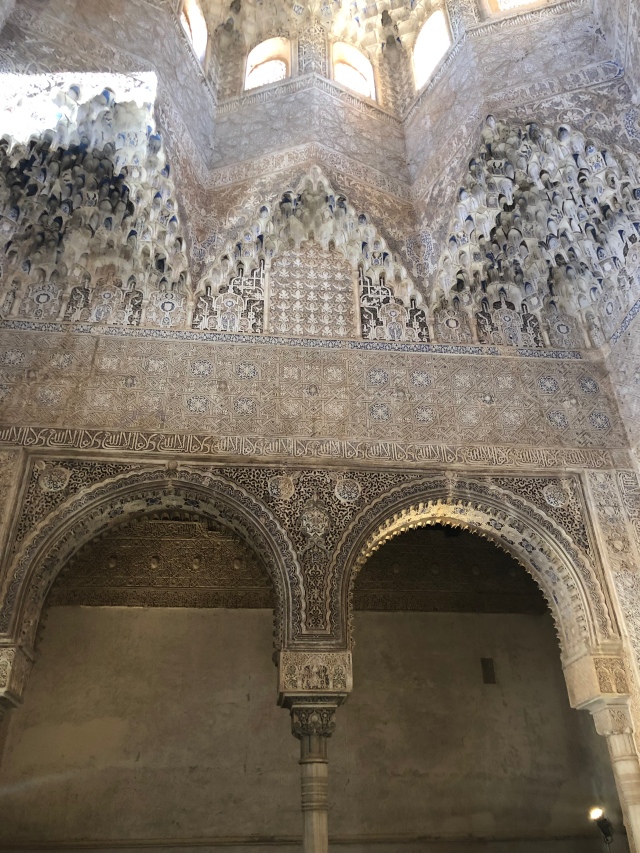 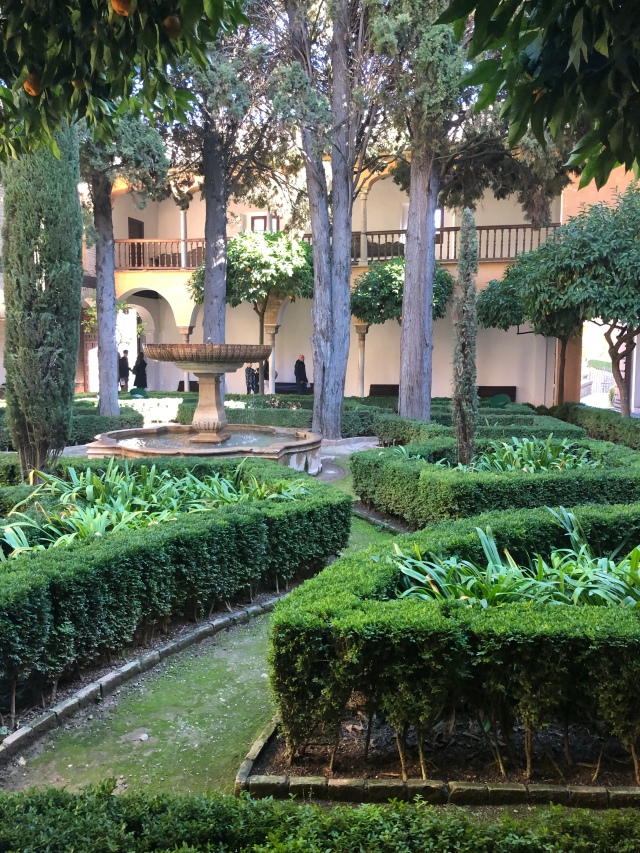 An orange tree. Many are all over the Alhambra and Granada.

The Alhambra from afar.

The Generalife– summer home of the inhabitants. 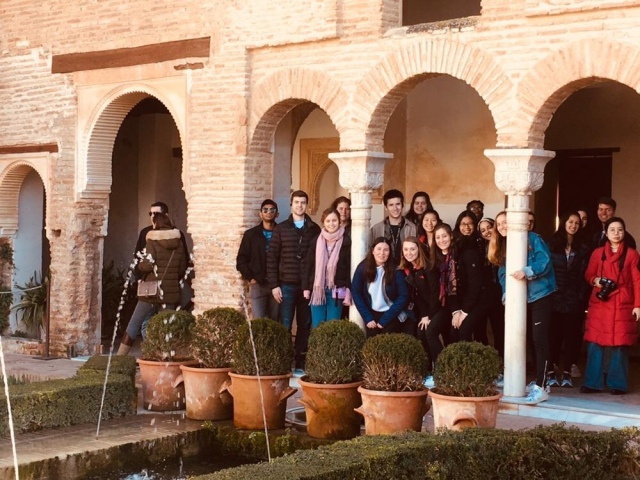 Group photo at the summer house. 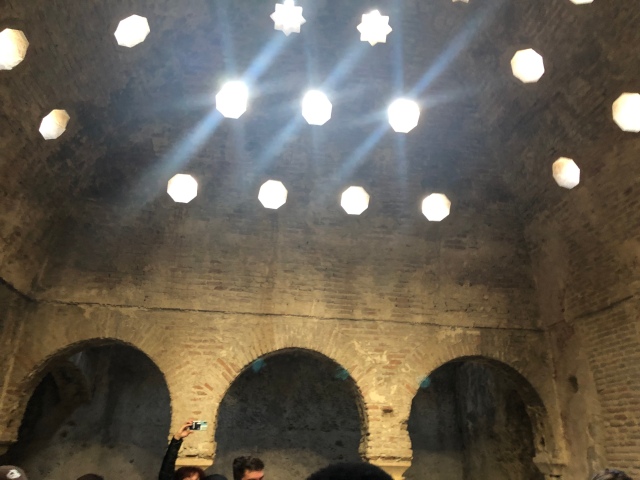 The Alhambra from afar. 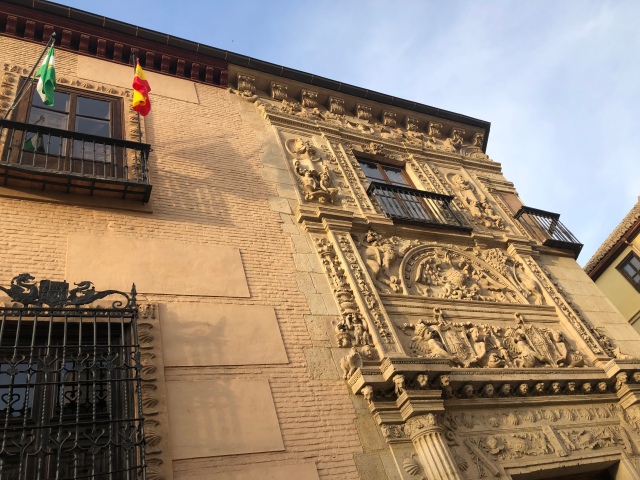 An old nobleman’s house. His daughter fell in love with the horse hand, so he killed him and locked his daughter in until he sent her to a convent.

More pics of the Alhambra, at sunset.

2 thoughts on “Week of Classes, Alhambra, and Albaicin”